At the end of my unique New Year’s celebration this year on the island of Nargana in the San Blas Archipelago, these were the words that a man said to me as I walked past him at 2am on my way back 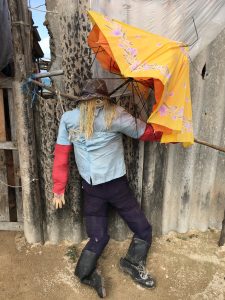 to the dinghy that would carry me across the water to the sailboat I was currently living on.

“Es una nueva vida!” he called out, beaming with joy.

“Yes,” I replied, “the old life has been burned away.”

“Feliz ano nuevo!” we called out to each other.

I rounded the corner to see that the ladies in white dresses (who had been drinking beer and sucking on lollipops while dancing hours before) were still at it. My sailing companion, Charlie, and I decided that we couldn’t go back without saying good night to them, so we walked over to enjoy one more dance with this joyful bunch.  There was a line of plastic chairs facing the makeshift dance floor on the tile porch in front of one of the nicest homes on the island. 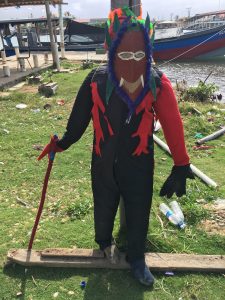 There were children, grandmothers, fathers, and other family members all out celebrating their new lives in the wee hours of the new year. 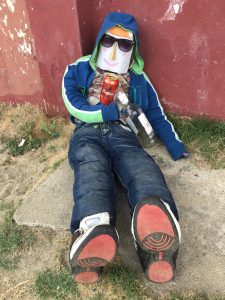 Different combinations of men and women got up to dance to music played over a big speaker by the man of the house. Others sat in the line of chairs and watched them. I played with some children and enjoyed witnessing the multi-generational celebration, as an elderly grandma hovelled by with some of her family members to wish everyone “feliz ano”. We were graciously served a small plate of rice with chunks of ham and chicken in it, as traditionally people visit each other’s homes in the first hours of the new day and feed each other. I felt honored to be included in this lovely tradition. 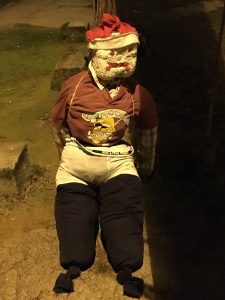 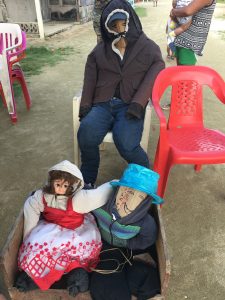 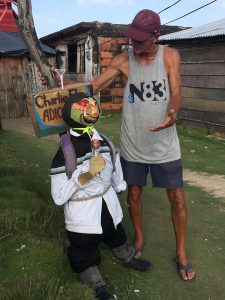 People in the villages in San Blas begin celebrating New Year’s just after midnight, and throughout the first 24 hours of the new year. There was no big build up, no count down, and no fireworks. In the ten minutes or so after the new day began people slowly began to meander out onto the main square of the village and hug, kiss, and shake hands wishing each other a happy new year. 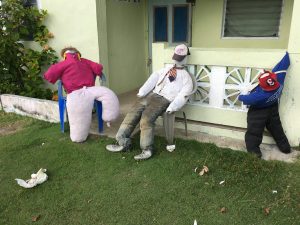 After some time of this, the life-sized human effigies that had been in front of homes around the village for the past week began to show up. Most were carried over the shoulders or in the arms of their makers, and a couple came by stroller. Once the first four or five had appeared and had been thrown in a pile on some grass near the water’s edge, someone unceremoniously poured fuel over them and started the bonfire. Slowly but surely the others were brought to the fire and thrown in. These comical human forms were stuffed with trash and plastic; it is commonplace to deal with burning plastic and the resulting fumes, as that is how trash is processed here. 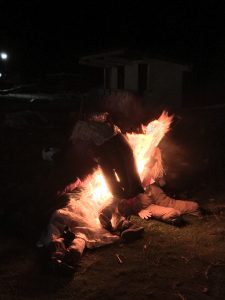 Locals gathered around with phones and tablets to film and photograph the scene. I wondered if there was once community singing or more ritual around this event in the days of the not-so-distant past when these devices were not so readily available. 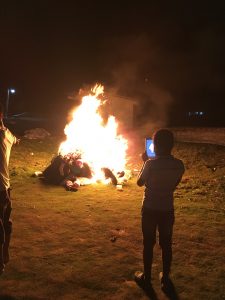 As the fire grew larger with the burning human forms, a man rushed in with his effigy in a stroller and tripped as he came near the fire. Landing in a front roll on the ground just feet from the massive burning pile, he swooped up his effigy and tossed it into the fire as he leaped dangerously close to the flames and over the edge.

I took a small piece of paper and wrote a short list of things from my old life that I am letting go of to toss in as a reminder to myself that there are so many versions of life to live. Often we are limited by our fear, being set in our ways, and a lack of creative thinking about how to make big changes. 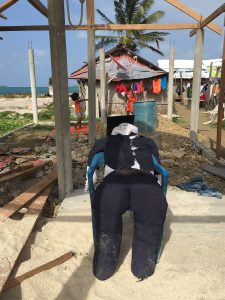 When we choose to step outside of our comfort zone, take risks, try new ways of doing things, and let go of the fear and things that hold us back, new versions of life are quite possible.
For me personally, it has taken a lot of inner work to let go of the fear around finances, being away from the security of my home and job, and my family, friends, kids, and dog. There have also been plenty of moments where I miss my old life, but with my children out of the house, and my boyfriend and grandmother gone from this Earth, there is no going back to what once was. The only constant is change. I have successfully burned away my old life and made room for the new, just as the good people of Nargana do each year. 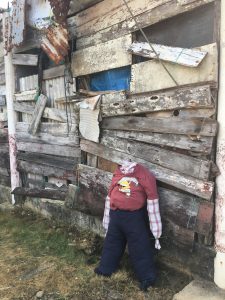 4 Responses to It’s a New Life