When I arrived in Panama, I knew very little of what to expect. Usually I do some research on the history, culture, and local customs of the place I’m going, but I was very busy before leaving with the dismantling of my Granny’s estate and my own life, and made no time to research.
I didn’t even toss my travel bible, a Lonely Planet Guide, into my backpack to read as I explored. 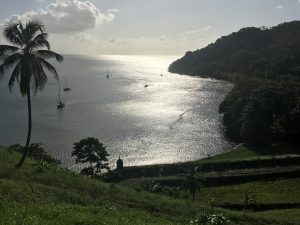 Only after I settled into my berth on this small catamaran, anchored in the bay of Portobelo, did I began to get curious. 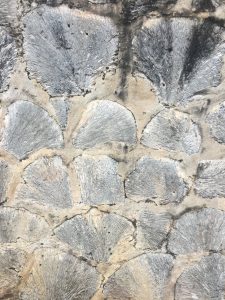 Finding myself surrounded by abandoned forts built with coral, sunken ships, jungles filled with howler monkeys, and a purple and white church with a mysterious Black Christ residing inside, I was compelled to unearth this small town’s thick history steeped in the dark human behaviors of conquest, slavery, piracy, environmental destruction, and rebellion.

Most of the sunken ships in this bay are actually well above the water, more run aground and abandoned than sunken. Although, there are certainly submerged wrecks too, like the remains of a sailboat 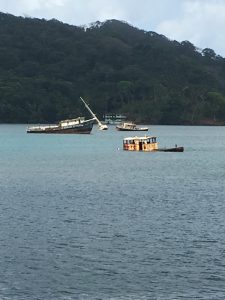 that I am currently moored to. I have now been afloat for at least 5 weeks here, maybe more, observing the changing horizon of sailboats that come and go from this anchorage, with the backdrop of decrepit sunken dreams remaining a constant fixture along the easterly horizon.

Just to the end of this row of abandoned ships, the shore of the bay is lined with an ancient fort’s wall, complete with rusty cannons protruding towards the sea. Locals gather there to play soccer on most evenings, hopping over the two cannons that lay in the center of the playing field as they run back and forth.

Dubbed “Beautiful Port” by Christopher Columbus on his 4thvoyage to the New World in 1502 and later shortened to Portobelo, it’s history has been riddled with invasions. Officially founded in 1597 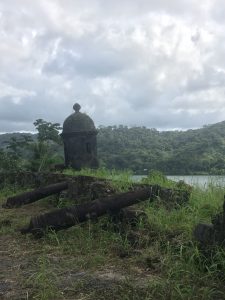 to create defensible space for Spanish trade routes across the Isthmus of Panama and as a port for Peruvian silver, it was fortified and attacked repeatedly until its destruction in 1739. Even after it was rebuilt twelve years later the city remained a virtual ruin.
Later, a large portion of the fortress was dismantled to build the Panama Canal.

The Black Christ, a life-sized, wooden figure displaying great emotional pain, is surrounded with mysterious legends about its arrival here. Believed to have been carved in Spain during the 17th century, it was being transported to the New World on a Colombian vessel. Due to foul weather, the ship was forced to seek safe harbor in Portobelo. 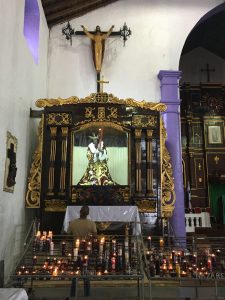 Legend has it, that every time the ship tried to depart a sudden storm prevented it from setting sail. The superstitious sailors threw the box containing the figure into the sea, causing the storm to subside and allowing them to sail on. The crate with the Black Christ washed up on shore in Portobelo and was found by a fisherman.

Today people regularly make pilgrimages to Portobelo to light candles in the church and make offerings to the Black Christ. Once a year, during the festival of the Black Christ many people walk the 53 miles from Panama City, some crawling the last mile or two, with hot wax being dripped over their bodies, sometimes being whipped or crawling on broken glass. 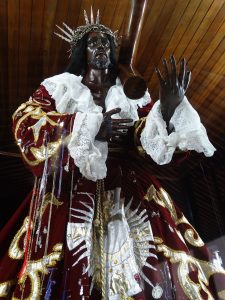 Many murderers, thieves, and scoundrels make the pilgrimage to seek forgiveness, designating the Black Christ as the “patron saint of criminals.”

The 4,000 or so residents of the town are of predominately of African mixed descent. Enslaved Africans were first brought to Panama in the 1500s. Spanish is the predominant language here, but now and again I have found myself fortunate enough to experience locals chanting call and response songs to rhythms played on hand drums, in a dialect of their African ancestors.  Various “Congo” or “Cimarron” communities exist throughout the Caribbean and Americas. They all have their own distinct cultural performances signifying their specific colonial Black experience. Some form of Carnival took root in nearly every country colonized by the Spanish, French, and Portuguese.

As I near the end of my time here in Portobelo, 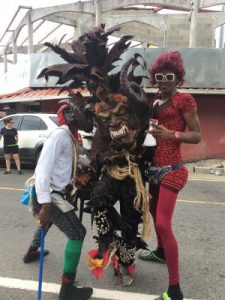 I have once again found myself curious as characters in homemade costumes with painted black faces, and others with elaborate devil masks, have been wandering through the streets this week, holding up traffic, some wielding whips. , 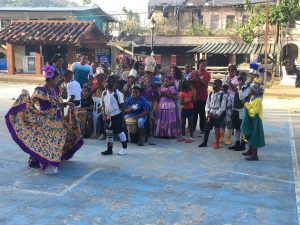 It turns out it’s the start of the Congo festival; a time when the local community reenacts it’s history of slavery and celebrates the power of resistance, creativity, parody, and community.

Pierce Freelon, a professor at the University of North Carolina, gives a depth of understanding to the importance of this cultural tradition:  “For me, as a black man, as an African American whose country has yet to deal with some aspects of their legacy of enslavement, it’s inspiring to see how the people of Portobelo are addressing these issues. They celebrate the festival through this ‘Congo’ tradition, which is an African dance where they are kind of critiquing slavery and colonialism through this amazing metaphor. The ‘Diablos,’ who represent the whip-wielding slave master, and the ‘Congo,’ who represents this liberated African.” 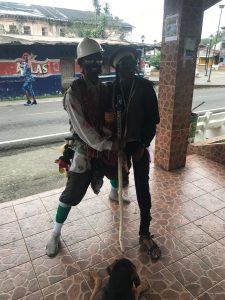 Through the Congo drama and the language of the Congo dialect, the characters parody the Catholic Church and the Spanish Crown to create a live, interactive critique of the institution of slavery. Spanish colonialists used the threat “the devil will get you” to dissuade rebellion and attempted escape. The Africans saw their enslavers as the embodiment of that threat, hence developing the character of the Diablo or devil to represent their captors.

The Congo drama has multiple characters and always ends with the main devil being captured, baptized, and sold by communities of self-liberated, powerful Blacks. This living physical narrative celebrates the history and spirit of self-determination and resistance to enslavement that brought freedom to this community of cimarronajes.

There have been many days in Portobelo’s past that have been full of terror, destruction, and despair. My unexpected days here have been beautiful and filled with gratitude for being alive in this day and age of relative peace, freedom, and tranquility. There are 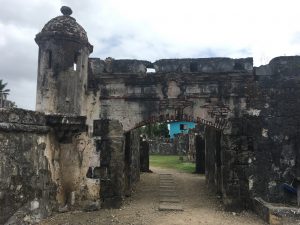 however, still pirates of sorts roaming these seas. Two nights before I was to be left alone on the boat for a week, an armed robbery took place on a boat anchored near us at 10:30pm. Bravely, I chose to forge ahead with being alone on the boat with my air-horn, machete, bright flashlight, and my ability to bark like a dog as my protection.  I admit I was a little shaken during my first two nights alone, and I did my inner work to ease my mind of fear and trust that I was protected.

On my third night alone my guardian angel appeared while I was swimming by a reef at the entrance to the bay as the sun was dropping below the watery horizon – a massive tall ship with sails flying, moving with a grace and prowess that commands attention and respect. 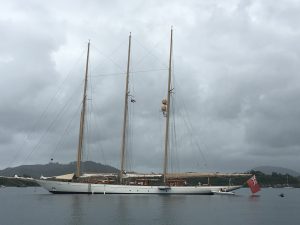 It anchored right beside me and became my only close neighbor in this bay of sunken dreams. Gorgeous to look at, with mast lights illuminating the varnished wood and intricate rigging under the full moon, 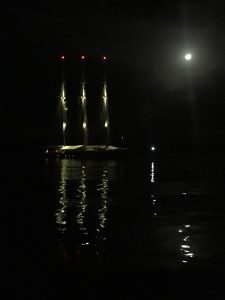 it quickly became a symbol of the gifts that come from being courageous, willing to push fear aside, and trust in the good of the universe.

As I have now had the pleasure and good fortune of meeting the lovely, international crew of Adix, I have come to find out that they take turns doing a night watch and are looking over me as well. I am resting easy and writing a love song to this village as my time in Portobelo draws near.

There is a very ironic part of the real and dangerous drama that now plays out in this bay of sunken dreams. In very much the same way that the roles of the European enslavers and Blacks are reversed in the parody of the Congo drama, it is also interestingly reversed in the real life drama that plays out in this bay. The vast majority of us visiting this village and living here peacefully on sailboats are of European descent and the thieves and pirates are mainly of African and Indigenous heritage. 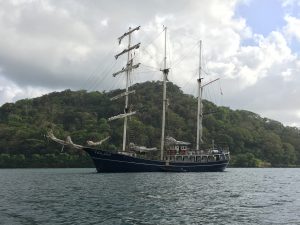 In a place where the biggest threat to health and safety was once the European ships sailing in to pillage, rob, and spread disease, it is quite perfectly ironic that now these ships are sailing in peacefully carrying residual wealth from years of history of our conquering ancestors. Our presence is no longer a threat to the humans that live here, but a source of resources for scoundrels to plunder and rob.

In light of all of this, I continue to spend my final days floating alone on a sailboat in this lovely and interesting bay learning to move at a new pace of life, admiring the beauty of the jungle, sky, and sea, as well as the beauty of what humans can create, while reflecting on the sunken dreams in my own life.
Using movement, yoga, curiosity, nourishment, self-love, and both narrative and community therapy I am creating my own new dreams of hope and faith here amidst the rubble of the tumultuous past. 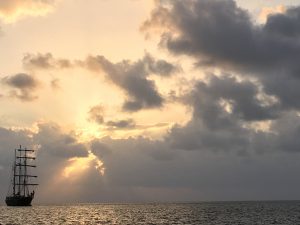 5 Responses to Life in the Bay of Sunken Dreams