The Queen of the Sea 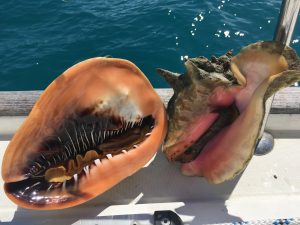 A giant snail has captured my heart and allowed me to look deeply at my environmental ethics and the ways humans have pillaged the seas for centuries. The queen conch, in its perfect spiral home, grows to over a foot long, with a silky smooth pink inside. Its shell has been coveted throughout time and across cultures. The conch shell has been used in customs, rituals, lore, and as adornments for humans and gods, and in Buddhism it is one of the 8 auspicious symbols. 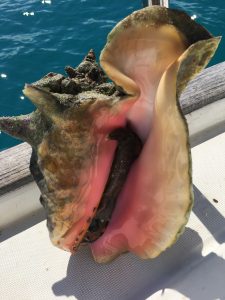 Bengali brides are adorned with the shell; it was used by the Maya as ink holders and as hand weapons. It has been placed on graves, blown during funerals to ward off evil spirits, and in the more recent past sold to tourists.

It’s tough, white, muscular body has been a cherished food source in island countries for years; known as lambi, cambombia, and saungille in different cultures, it is tenderized and fried, cooked in soups and stews, marinated in lime as ceviche, or put inside wraps with potatoes and curry here in the Eastern Caribbean and sold as a roti.

Conch meat is delicious; I haven’t eaten it too many times. With my swimming ability and the amount of underwater ground I explore in just one swim, it is clearly an easy sea creature to harvest. However, it is not very often that I find a spot with enough conchs large enough to feel comfortable taking these glorious creatures, whose only defense against humans is it’s very thick shell. 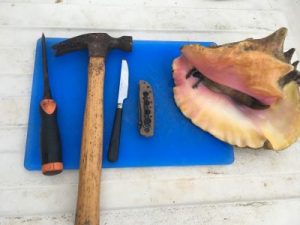 Last year in Panama I found a spot where I felt somewhat ok about taking two of these massive snails for food. I personally feel that it is important for anyone who eats meat to raise, harvest, fish for, or hunt and kill their own food at some point to get a deeper sense of what it is to take the life of an animal. I find it pushes me up against my ethical choices around what I consume in a way nothing else can. As a homesteader of sorts, having the knowledge and skills needed to raise chickens for meat, fish, or harvest other seafood 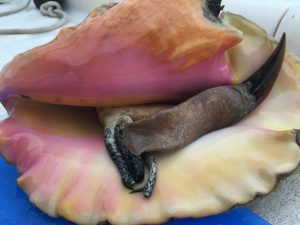 also gives me a freedom and peace of mind that I have the skills to provide for my family and myself if I needed to. 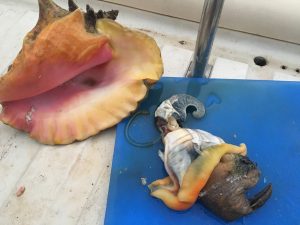 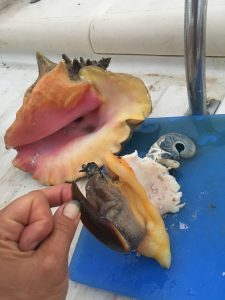 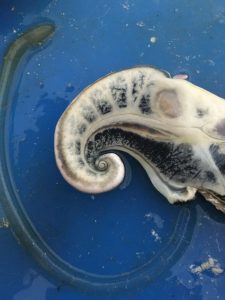 It gives me a sense of my place as an animal living and eating and subsisting within my ecosystem; ultimately, for me to survive there will be death – be it plants or animals. I feel better about eating something local over consuming fish harvested, canned or frozen, and shipped from halfway around the globe.

Yet, this year my experience with attempting to harvest conch to feed my crew was different. In the past two months, I have swum long distances around many bays and beachfronts in multiple island counties throughout the Eastern Caribbean. Covering lots of ground, exploring with a keen eye for sea life, I have seen very few conchs. When I do spot them, they are quite small. In one anchorage not too long ago, I swam to a sand bar far from shore, where few people explored.
I began to see many conchs and decided that if I could find one or two that were big enough I might be willing to take their lives and prepare them for dinner. Just after I decided that, I eyed a large queen conch. I dove down and easily plucked it off the bottom and swam around for another 10 minutes with it, contemplating my decision.

We had been fishing for the past few weeks and had only landed one fish. Maybe that made it more ok to harvest this defenseless, beautiful animal for my crew, since we had not made much of an impact on the sea life so far. I wasn’t sure one conch was really enough food for all three of us, and I debated if I could even bring myself to take the life of this perfect spiral animal with it’s big beady eyes that looked at me.

Soon after I convinced myself that I could do it, I spotted the biggest gastropod I had ever seen, quite camouflaged with it’s white coating over the back of its shell and half-way buried under the sand. I dove down to inspect and decided that this one would certainly be enough food for all of us. Never had I seen such a massive snail.  At about 15 feet deep, it was a little more challenging to pry the foot-long shell out from the hole it had dug itself into, but still not very hard. 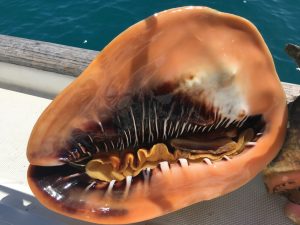 The giant turned out to be an emperor or queen helmet, one of the largest species of gastropods in the world, reaching lengths up to 14”. I think it is one of the most beautiful homes I have ever encountered.  I challenged myself to swim back to the boat with both of these animals. Tucking the queen conch in the front of my swimsuit against my belly, I managed to balance the emperor helmet on my lower back and use my swimsuit to stabilize it. With this precarious load, I successfully swam about 500 yards back to the sailboat.

My crewmates were amazed and came to greet me as I pulled the gastropods out of my swimsuit and put them in buckets on the boat. Watching them look at me from their new constricting environments, I tried to mentally prepare myself for the work of taking their lives. I knew the process from my previous winter at sea, but I move slowly when I kill a conch. I study it’s perfect form and honor its life after making the hole in the shell in order to slip a knife in and sever the muscle that attaches the animal to the inside of its home.

I spent a lot of time with the creatures that evening. Admiring their perfect spirals and forms and looking into their little eyes that curved around on stalks from under their shells.

The next day while ashore with wifi, I dug into some research on queen conchs and emperor helmets. I came to find out that the helmets are not the preferred conch for food because of its somewhat bitter taste. They have been taken more often for their shells – to be sold to tourists or to be used as a medium in which to carve cameos. 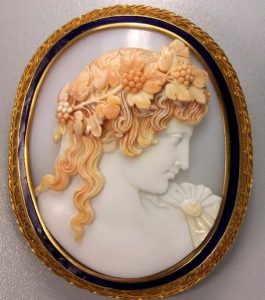 Cameos are intricate carvings, often of a person’s profile, often worn as pendants. They have been carved form stone for many centuries in Europe, and carving into shells became more common in the 15th-16thcenturies in Rome. 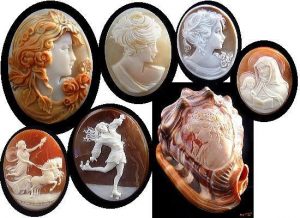 The word cameo is believed to have come from kabbalistic slang, signifying a “magical square” – a talisman where spells are carved.

This amazing emperor helmet had me under a magical spell and I found myself more and more reluctant to take it’s life the more I researched. It took a big dive in population during the 1850s when its shell became a popular tourist souvenir.

I studied the queen conch further and learned that they can live to be 30 years old, and some other species have individuals living up to 40 years.  The adults wander for miles, throwing their bodies forward with their digging foot over a home range of 1-15 acres. 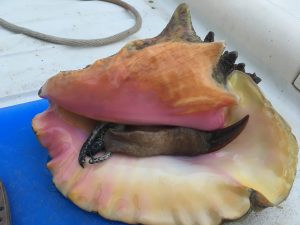 Females can lay up to 10 million eggs in a spawning season.  That’s a huge number of eggs, which apparently still can’t keep them out of the danger zone for being overharvested.

Queen conch fisheries have been closed in several countries. In 2003 recommendations came from CITES  (The Convention on International Trade in Endangered Species of Wild Fauna and Flora) that conch fisheries be closed in some Caribbean counties. The queen was listed with a status of not currently being threatened by extinction, but if left without regulation it would become so. The Florida Keys was a major source for conch up until the 1970s and now it is scarce and all harvesting in Florida is prohibited. Now, 80% of conch meat is imported.

After doing my due diligence I decided I could not take the lives of these creatures that could live almost as many years on this planet as I have. With the chance that they might get to lay another 10 million eggs this year, I swam them back out to the sand bar where I first encountered them.  Saying a silent prayer that their lives would be spared from being discovered by other humans, I released my captives.

Back on the sailboat we had tuna from a can imported from Vietnam for dinner that night.

With my curiosity still sparked by these creatures in the shape of the Golden Mean, I researched the 8 auspicious symbols of Buddhism to learn more about what they were about. I found that they are “the deep and far-reaching sound of Dharma teachings, which awaken humans from the deep slumber of ignorance and urges them to accomplish their own and other’s welfare. “ 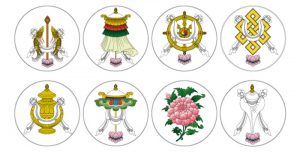 This seemed fitting to my relationship with one of the symbols – the queen of the sea. She had awakened in me curiosity, the motivation to learn, a deep self-inquiry, and most importantly helped me become less ignorant to the precarious state of survival that my fellow humans and I have left her species in. I plan on not eating conch again, barring the unlikely possibility of becoming stranded with no other means of survival. I have been awakened time and time again from the deep slumber of ignorance; I hope that education paves the way for more of us to find the awakening that creates a balanced means for us to sustain our own welfare in balance with other beings on this planet. 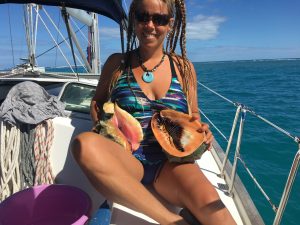 ← My Humbling Life at Sea
Tips for the Modern-Day Pirate →

2 Responses to The Queen of the Sea